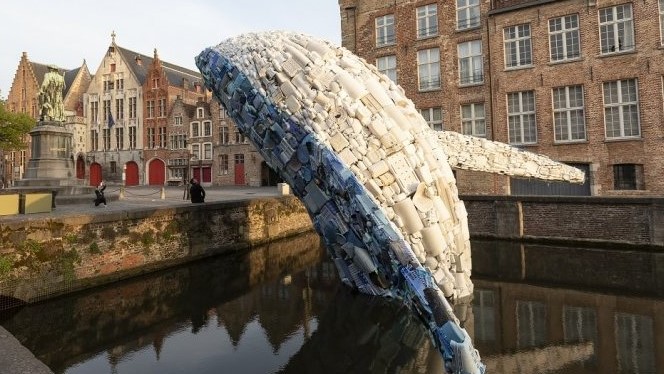 Giant plastic whale on its way to Utrecht

Soon, the Catharijnesingel near TivoliVredenburg will see the arrival of a giant plastic whale made of five tonnes of litter that was polluting the ocean near Hawaii. RIWA-Rhine sponsors the arrival of the whale in Utrecht, because we want to gain attention for plastic that enters the sea through the rivers.

Soon, the Catharijnesingel near TivoliVredenburg will see the arrival of a giant plastic whale made of five tonnes of litter that was polluting the ocean near Hawaii. The Faculty of Law, Economics and Governance of Utrecht University has arranged for the piece to come to Utrecht for a period of six months. ‘This whale is a symbol for our research into sustainable water management.’

Marleen van Rijswick, Professor of European and national water law and programme leader for the Utrecht Centre for Water, Oceans and Sustainability Law, first saw the piece titled Skyscraper when she visited the city of Bruges to attend a conference on sustainability. Impressed by the 11-metre high structure, she started looking into ways of moving it to Utrecht.

Eventually, and with help from six different partners who were all equally excited by the look of the whale and its message, she made it happen. Assembly of the plastic whale will start in late December, and the official unveiling will take place on 17 January. Afterwards, a variety of events and lectures will be organised that centre on the whale and its relevant themes (click here to view the complete programme). During its stay in Utrecht, everyone will be able to take a look at it.

Skyscraper is a work of art created by the American StudioKCA agency that allows the makers to call attention to the issue of plastic waste that is polluting the oceans. ‘The piece is a great fit for our research into the sustainable use of rivers and oceans’, says Van Rijswick. Utrecht University does quite a bit of research into the causes and the harmful effects of the great amounts of plastic waste. Van Rijswick, for instance, is researching how ecosystems can be protected by a source-based approach that prevents rivers from becoming polluted and oceans from becoming a plastic soup. Seline Trevisanut is researching how the law can contribute to more sustainable ocean use. Alex Oude Elferink is on the Scientific Advisory Board of The Ocean Cleanup. Oceanographer Erik van Sebille is mapping just how plastic waste moves throughout the ocean. And the Faculty of Science is working on the development of plastic made of biomaterials.

Van Rijswick: ‘Not only is the whale a great fit for our research, it’s also a cool way to make people aware of the fact that we really need to take action on this front. The piece is about as high as a four-story building, so it’s sure to stand out. It even looks quite cheerful – until you examine it properly and recognise where all the plastic came from, that is. It’s quite a clever concept by the artist.’

Until recently, the artwork was set up in Bruges for the 2018 Bruges Triennial. Utrecht will be Skyscraper‘s second destination. Next summer, it will travel onwards to Paris and from there to many other cities around the world.

RIWA-Rhine sponsors the arrival of the whale in Utrecht, because we want to gain attention for plastic that enters the sea through the rivers.

This project was made possible both financially and practically with the aid of the Province of Utrecht, the Municipality of Utrecht, the Stichtse Rijnlanden Water Authority, RIWA (the Association of River water companies), the a.s.r. insurance company and the Sweco engineering advisory agency.